Recording Studio: Al-Kindi (801–873 AD) was the first great theoretician of Arabic music. He proposed adding a fifth string to the oud and discussed the cosmological connotations of music. He surpassed the achievement of the Greek musicians in using the alphabetical annotation for one eighth. He published fifteen treatises on music theory, but only five have survived. In one of his treaties the word musiqia was used for the first time in Arabic, which today means music in Arabic, Persian, Turkish, English and several other languages in the Islamic world.
Al-Farabi (872-950) wrote a notable book on music titled Kitab al-Musiqi al-Kabir (The Great Book of Music). His pure Arabian tone system is still used in Arabic music.

Arabic maqam is the system of melodic modes used in traditional Arabic music, which is mainly melodic. The word maqam in Arabic means place, location or rank. The Arabic maqam is a melody type. Each maqam is built on a scale, and carries a tradition that defines its habitual phrases, important notes, melodic development and modulation. Both compositions and improvisations in traditional Arabic music are based on the maqam system. Maqams can be realized with either vocal or instrumental music, and do not include a rhythmic component.

By the 11th century, Moorish Spain had become a center for the manufacture of instruments. These goods spread gradually throughout France, influencing French troubadours, and eventually reaching the rest of Europe. The English words lute, rebec, guitar, organ and naker are derived from Arabic oud, rabab, qitara, urghun and nagqara’.
The Arabs invented the Ghazal (love song), often used since in Arabic music. Al-Ghazali (1059 – 1111) wrote a treatise on music in Persia which declared, “Ecstasy means the state that comes from listening to music”. The oud was popular between the tenth and sixteenth centuries then fell into disuse, enjoying renewed popularity in the nineteenth century. 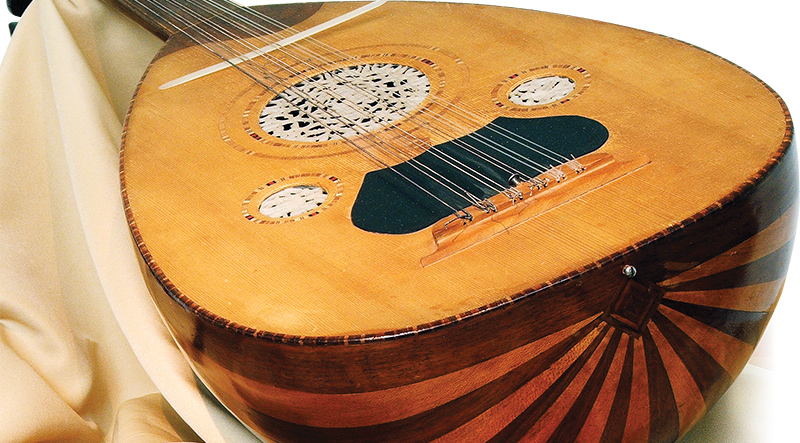