Recording Studio: the History of Timpani

Used as cavalry instruments, the timpani were first utilized by the Muslims, Ottoman Turks, and Mongols during the fifteenth century. In 1457, a large procession representing King Ladisalas V of Hungary marched into Paris. Several of the horses carried large kettledrums. This early timpani trend soon spread throughout Europe. Often these drums were paired with trumpeters to represent emperors, kings, dukes, princes, and lords.

Recording Studio: Timpani in the orchestra

During the Baroque era, timpani were the first percussion instrument to be recognized as a standard part of the orchestra. The first credited use of timpani in orchestral music was by composer Lully, with his opera These’e. At the peak of the Baroque Era, composers, such as Bach and Handel, were using the timpani frequently. At the time, the pair of timpani were tuned in intervals of fourths and fifths.

The first composer to explore the possibilities of the timpani was Beethoven. He wrote solo passages and departed from the traditional tuning. He was known to use intervals like diminished fifths, minor sixths, and octaves between the two drums.
Wagner and Berlioz expanded on the ways timpani were used in an orchestral setting. Both wrote for two sets of timpani to be played by two players. Berlioz’s Requiem calls for 16 timpani and 10 timpanists! In the 19th century, composers also started to experiment with different types of timpani mallets.
Until the 19th century, timpani were made of copper bowls and rested on folding stands. Generally, they were used in pairs and were tuned by individual hand screws. This process tended to be very slow and tedious. The first ‘machine’ timpani, with a single tuning mechanism, was developed in 1812. Throughout the early 20th century, timpani mechanisms continued to improve.
The technical demands of timpanists continues to develop as the timpani is placed in new ensembles and styles of music. 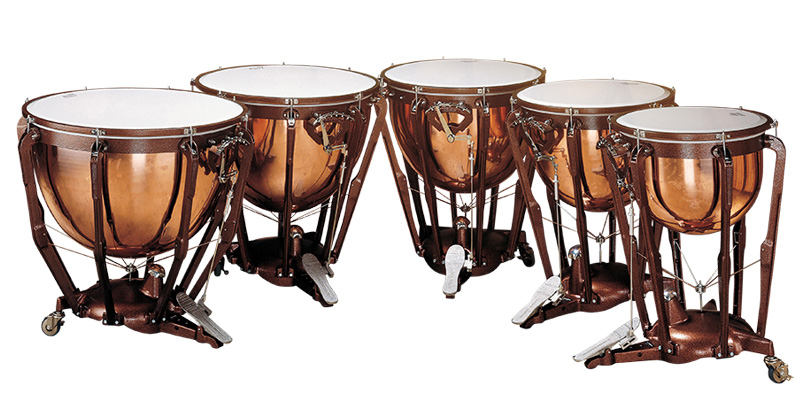