It doesn’t look like anything from a recording studio at first. But as the arm of the printer slides back and forth, a violin slowly takes shape. It has all the elegance of that delicate instrument but has a thoroughly modern look. The violin is electric. It is perfectly clear. And its body was created entirely inside of a 3-D printer.

“At the beginning, it was just a personal challenge,” Laurent Bernadac, French-based creator of instrument.

Bernadac and describes the 3Dvarius as the world’s first fully playable 3-D printed recording studio violin. He’s been playing the violin since he was 5 years old but his professional background is in engineering.

It’s no surprise designers with a background in the sciences are gravitating toward this new technology. The field is highly sophisticated and accessible enough that anyone with a PC and a desktop 3-D printer can begin printing their own musical instruments at home.

In 2012, Bernadac was finishing his engineering degree at the National Institute of Applied Sciences of Toulouse when he became interested in the idea of designing his own electric violin. While ordinary electric violins have a modern, almost harsh sound, Bernadac wanted something with a look and tone that replicated the forms of the legendary Stradivarius.

“I had just one goal: create an instrument in perfect symbiosis with my needs. Something new, with a more natural playing style,” he said.

For a year, he researched the history of violin design, visiting design exhibitions and conferring with musicians and instrument makers. The result is an utterly unique instrument — almost alien in its construction, yet warmly familiar. Because of the swooping curves that make his violin so beautiful, it was a design that could only have been realized in a 3-D printer.

Bernadac uses an SLA 3500 3-D printer, which he favors because of its precision, transparency and the strength of its clear resins. He designed the instrument entirely on his PC.

“I’ve always used PCs,” he said. “I like the flexibility. You can do what you want, with no permission restriction.” 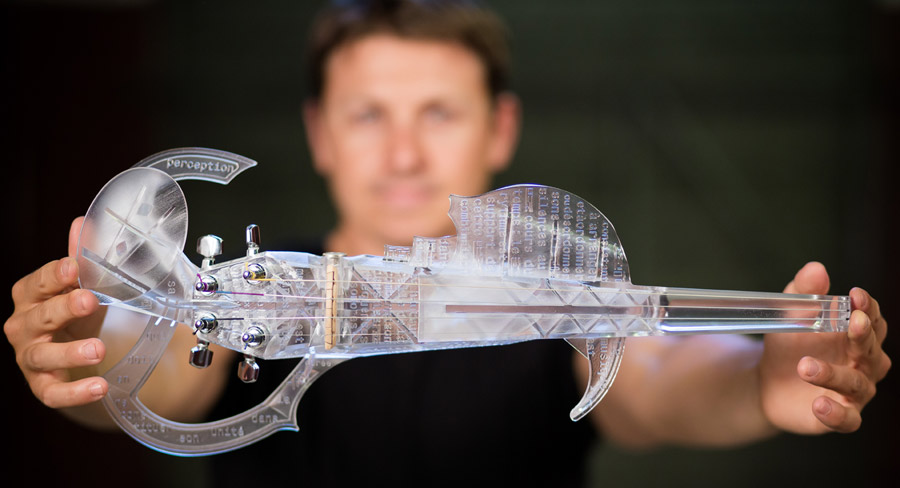