Recording Studio: Meet Tim Linhart, an ice sculptor from Colorado who is based in Sweden. Which makes perfect sense, because ice. Linhart is the founder of Ice Music, an entire orchestra of what he calls “ICEstruments,” which has its own igloo concert hall in Luleå, Swedish Lapland.
About 20 years ago, while perched on the top of a mountain, Linhart carved himself a recording studio string bass out of ice, and was stunned at the beautiful sound it produced. “I skied all the way down to the village and I told them what had happened to me and how excited I was,” Linhart says in the video. “They pretty much thought I was a kook.”

As heard in the video above, his orchestra’s songs of stringed and percussion ICEstruments are compelling and can be undeniably beautiful—which also, undoubtedly, has something to do with the haunting nature of Swedish folk music.
An ice orchestra can’t play just anywhere, of course, since the recording studio instruments would melt during performance. In addition to the obvious issues related to that, tuning would also be impossible, with stringed instruments going down in pitch and percussion instruments going up. Which is why Linhart’s orchestra performs in a unique double-domed concert igloo, designed to vent the audience’s warmth up and out while keeping the instruments—and players—cold. And, oh yeah, the place is lit with colored lights stored inside of the players’ ICEstruments.
Linhart says the listening experience qualifies as his idea of magic: “unbelievable but happening.”
Of course, such recording studio instruments are exceedingly delicate. Just breathing on an instrument can make it go out of tune. The violins are suspended from the ceiling so that a performer’s body heat doesn’t melt them.
But fixing cracks is much easier than on a wooden instrument.
“If you want to glue a crack in an ice instrument, you just take a little straw, blow through it until the ice melts and then let it freeze again,” Linhart said.
“With wood, you can only carve. With ice, you can also grow.” 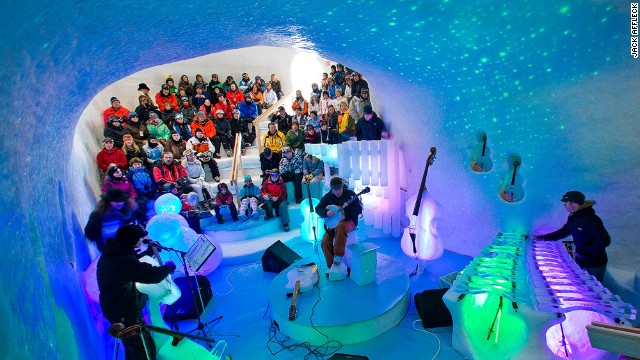