Recording Studio and an RCA 77dx

Recording Studio Gods were surely looking down on us this week! We fatefully acquired a beautiful vintage RCA 77dx ribbon microphone. The story of how this microphone became ours is certainly worth sharing.

My mother, her old mum, and all her two sisters, are avid trawlers of Sydney’s op shops. There’s a lot in Sydney. When I was younger I used to tag along to “Vinnie’s” to see what little finds there may be waiting to be found. Fast-forward a few decades and now there’s a group called LifeLIne. They’re basically a charity. They take donations of old and unused goods, sell them, and then help the poor.

This week I woke up one morning to a text picture my mother had taken of an old microphone in a LifeLine shop. I instantly recognised it. It was an RCA 77dx Ribbon microphone. These microphones are iconic microphones both to look at and how they sound. They are well known for being used on many Elvis and Bing Crosby recordings. They have a particular sound to them which is impossible to emulate without the real microphone being available. When you see pictures of Elvis in a Recording Studio it’s usually with one of these microphones in front of him. 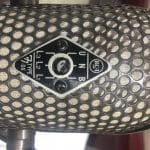 My Reaction to the Finding!

I thought “there’s no way this could be true!”. So I went up to the shop and spoke to the girl who had it in a locker. She had certainly done her research. The microphone didn’t have an XLR cable attached to it. So I couldn’t use it in the Recording Studio immediately. She was charging a third of what these microphones sell for on Ebay and they all come from America! Getting one to Australia would be painfully expensive. On the price tag it said “ONO”. Without hustling I asked how much she was prepared to shift on the price. A lot! I couldn’t believe it.
I left the shop and made some phone calls and I called the microphone Gurus of Australia that I know very well. Both Gunter Wagner and Glen Phimister were very surprised to hear about the find. After consulting Glen he suggested that I “couldn’t really go wrong” in purchasing the microphone for the price they were offering. So I made the buy!

Assessing the Quality of the RCA 77dx

The main concern with the microphone was with the quality of the internal electronics. Ribbon microphones are extremely simple microphones. The likelihood of not being able to restore it to working order was very minimal. When Glen opened up the microphone he couldn’t believe the quality of the microphone. He felt that it had never been used. It was as healthy on the inside as it looked on the outside. Basically unused! The one thing required was to install a lead so the microphone could be used. I left it with Glen.
A day later I get a call from Guru Glen. “I’ve finished with your mic”, he said. “How does it sound?”, I urged! “It sounds great! To be honest, I really don’t think this microphone has ever been used!”. The Recording Studio Gods were on our side this time. I was over the moon. I can’t wait to use this microphone on some records and get that old school vintage sound the proper way. It was a great week for our Recording Studio Crash Symphony Productions!
If you would like to record with our ever growing array of vintage gear call us on 02 9953 7686 or contact us at info@crashsymphony.com.au.