When most people think of how a cymbal sounds, they’re generally thinking of a crash cymbal. These are the loud, explosive cymbals that are used to accent particular parts in the drum pattern.
Crash cymbals can range from around 8” in size, up to around 24”, changing the pitch drastically. They can also range in thickness, with brighter tones from thinner cymbals. Typically, a beginner set of cymbals will have a crash somewhere between 14” and 18” in size.
Occasionally, a beginner kit will have a crash ride, which is designed to function as both a crash and a ride. Usually, this is something of a compromise of each type of cymbal.
Generally, crash cymbals will be placed to the left of a right-handed kit.

A ride cymbal is often the biggest cymbal in a typical beginner drum-kit (but not always), and in a right-handed kit is generally placed on the right above the floor tom. Whereas crash cymbals are typically used for accents, ride cymbals are used to play steady patterns, often in a similar manner to hi-hats.
Whereas a crash has a sound that is rich and explosive, rides tend to have a shimmering, sustaining sound. Generally (though not always), ride cymbals tend to be larger than crash cymbals in a typical beginner kit. An average ride may be around 20”, but rides of 26” and bigger are not uncommon.
The sound of a ride varies hugely depending on where it is hit. The bell (the bit around the cymbal mount) produces a sharp bell ‘ping’ sound, with low sustain, whilst the bow produces a more subtle, familiar cymbal sound. This variation makes the ride an incredibly versatile cymbal.
Again, thinner rides will give a lighter, brighter and ‘washier’ sound, whilst thicker rides tend to be darker, with a louder, bell-like ‘ping’.

Hi-hats are the pair of cymbals that sit together on stand, with a pedal to open and close them. These are used to play steady patterns, and playing them whilst open provides the means to provide an additional accent.
When played closed, the sound can vary from a soft, crisp, percussive ‘chick’, to more aggressive, muted and metallic sound, depending on cymbal type. When open, hi-hats have a sandy, ‘sizzle’ sound that cuts through, allowing the drummer to easily accent.
Once again, lighter hi-hat cymbals produce a brighter sound, whilst heavier cymbals produce a darker sound. Recording studio Hi-hats are typically between 13” and 16”.
Here is a great video about how cymbals are made.
https://www.youtube.com/watch?v=SK8XHULfllo 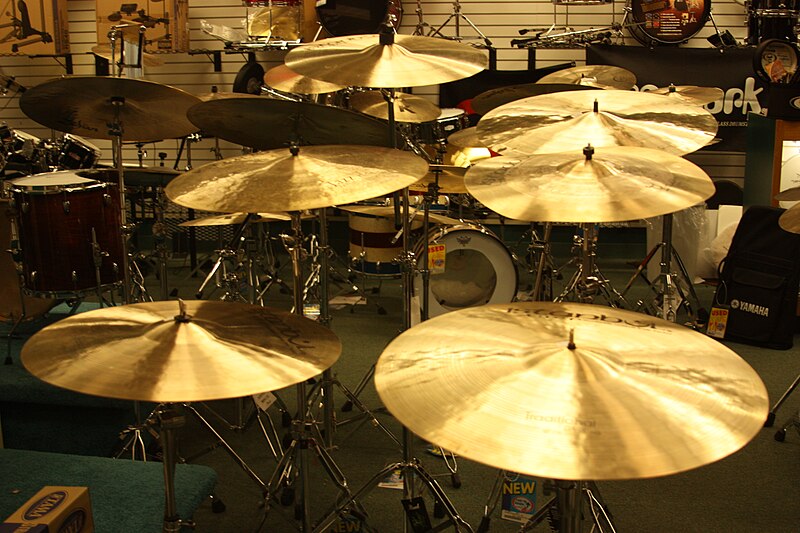