Recording Studios: The Evolution of the Modern Drum Kit IV

Recording Studios: Up until 1928 drummers had persisted with the “Clanger” or cymbal striker as earlier covered. Drummers tired of the monotonous characteristic clanging sound of the cymbal striker turned to the Snow Shoe Sock Pedal. Designed as an alternative method of independently playing cymbals the player would simply slip his foot into the toe strap and press down to hit the top and bottom cymbal together. Aided by a spring loaded hinge the top and bottom cymbal would recoil and hit together as desired similar to the hi-hat action familiar to us all today.

Although the snow shoe sock pedal, in all its variations and models, was an improvement on the clanger, it soon gave way to the Low-Boy. The low-boy sat approximately 9 inches off the floor and utilized 10″ and 12″ cymbals with very large bells. The low-boy was only playable with the foot and at this stage could not be played by hand in the cross-over manner that is used today.

In 1928 Leedy, Ludwig and Slingerland all offered a conventional Hi-Hat stand along side the low-boy in their catalogues. The conventional hi-hat stand as we know it today did not become readily accepted when first released in the late 20’s. The low-boy was still the drummers first choice until the mid 30’s.
When Slingerland released the Gene Krupa model manufactured by Walberg & Auge, the hi-hat gained wide acceptance leaving the low-boy to the history books. The modern drum-kit was almost complete.
Armed with these new inventions Drummers at this stage were still using wood blocks and sound effects with hoop mounted toms, racked to consoles on wheels.

In 1935 Gene Krupa changed the face of drumming by using what was refereed to as a “Stripped Down Kit”. Designed by the Slingerland Company Krupa’s kit was a standard four piece and included tom-toms with tuneable heads both top and bottom. Tuneable toms took the world by storm, and so too did Krupa’s new streamlined kit. Stripped of the usual sound effects of blocks, cowbells etc, Krupa’s star status as the drummer for the Benny Goodman band made the four piece an industry standard. His flamboyant style and extended drum solos gave rise to a new generation of solo performers.
Gene Krupa was instrumental in developing and designing the double-headed tuneable tom-tom in conjunction with the Slingerland Company. Krupa’s set-up of a bass drum, mounted 13 inch tom and one or two floors toms became the standard configuration used by players throughout popular music. 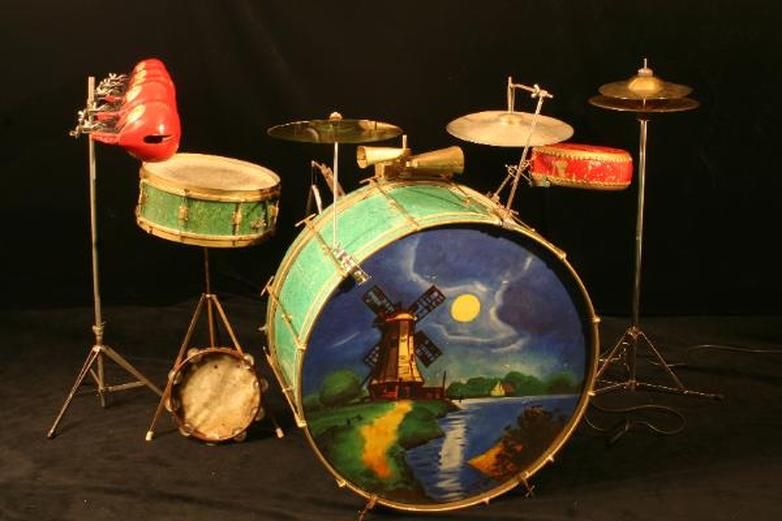