Recording Studios Sydney: What is Soundproofing

Soundproofing makes your room quieter, by blocking-out external noise, while…
Acoustic Treatment is makes your recording studios Sydney sound better on a recording, by absorbing excessive ambience. Ideally, any recording studio should use a combination of BOTH.
When a room is perfectly soundproofed, outside noises stay outside, and don’t disturb your sessions. inside noises stay inside, and don’t disturb your neighbours.  But until you’ve recorded in a room that ISN’T soundproofed, you probably don’t realize how much noise actually exists. For example:

But first let’s tackle the outside noises, using…
The 4 Methods of Soundproofing
The process of soundproofing a room is accomplished using a combination of 4 tactics:

In this article we are just going to cover the first one: Adding Mass…

The walls of Recording studios sydney require lots of mass…which prevents them from vibrating in response to sound energy.
When building a room from scratch, adequate mass can be added to the wall simply by building it thick, with a dense material such as concrete.
But to add mass to an existing room, additional structures must be built using materials such as mass loaded vinyl, aka Sheetblock, which is a standard solution for both professional and DIY projects.
To measure how effective materials are at soundproofing, a metric known as Sound Transmission Class (STC) is used. Hard materials like concrete will have higher STC’s, while softer materials such insulation will have lower ones.
Here’s a general guideline of what the numbers mean:
20-30 is poor
30-40 is average
40-50 is good
The other metric used is Sound Transmission Loss (STL), which some say is better because it measures isolation in dB at specific frequency bands…
While STC uses just one number for the entire frequency spectrum, which can often be misleading in terms of actual performance. 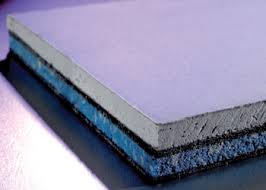