What would a Sydney recording studio do without Caffeine?  Those long days and night at the desk and in the booth, staying sharp for those long sessions. Caffeine can be a very helpful part of Sydney recording studio life.
Caffeine is an alkaloid occurring naturally in some 60 plant species, of which cocoa beans, kola nuts, tea leaves and coffee beans are the most well-known. Other natural sources of caffeine include yerba maté, guarana berries, guayusa, and the yaupon holly. Caffeine is added to many popular soft drinks, and is also a component of a number of pharmacological preparations and over-the-counter medicines including analgesics, diet-aids, and cold/flu remedies.

The amount of caffeine consumed in beverages varies enormously and is dependent, for example, on the strength of the drink, and the amount consumed with cup size playing a key role. Coffea canephora (robusta) is known to contain more caffeine than Coffea Arabica (arabica). However, as a basic guideline an average sized cup of soluble coffee contains approximately 65 mg caffeine, whilst a cup of roast and ground coffee contains around 85 mg. A 30 ml espresso cup contains around 50-60 mg caffeine. Finally, a can of cola or a cup of tea contains 25-45 mg caffeine. Tea actually contains more caffeine than coffee on a dry weight basis, but a smaller weight of tea is generally used to prepare a brew. Decaffeinated coffee generally provides less than 3 mg caffeine per cup. Cocoa and chocolate contain much smaller amounts of caffeine.

So it doesn’t necessarily need to be coffee to get your Caffeine fix! Dark chocolate for example has almost as much! 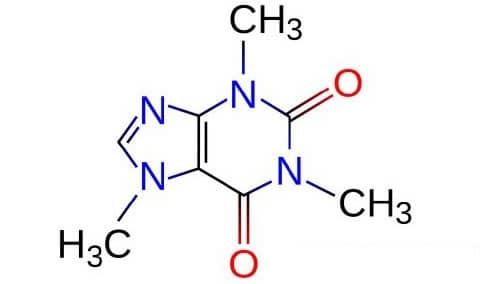