Recording Studio: Morrison moved frequently as a child due to his father’s naval service, first from Florida to California and then to Alexandria, Virginia, where he attended George Washington High School. As a teen, Morrison began to rebel against his father’s strict discipline, discovering alcohol and women and bristling at various forms of authority. “One time he told the teacher he was having a brain tumor removed and walked out of class,” his sister Anne recalled. Nevertheless, Morrison remained a voracious reader, an avid diarist and a decent student. When he graduated from high school in 1961, he asked his parents for the complete works of Nietzsche as a graduation present—a testament to both his bookishness and rebelliousness.

Upon graduating from high school, Morrison returned to his birth state to attend Florida State University in Tallahassee. After making the Dean’s List his freshman year, Morrison decided to transfer to the University of California at Los Angeles to study film. Because film was a relatively new academic discipline, there were no established authorities, something that greatly appealed to the freewheeling Morrison. “There are no experts, so, theoretically, any student knows almost as much as any professor,” he explained about his interest in film.

He also developed an increasing interest in poetry at UCLA, devouring the Romantic works of William Blake and the contemporary Beat verse of Allen Ginsberg and Jack Kerouac while composing his own. Nevertheless, Morrison quickly lost interest in his film studies and would have dropped out of school altogether if not for his fear of being drafted into the Vietnam War. He graduated from UCLA in 1965 only because, in his own words, “I didn’t want to go into the army, and I didn’t want to work—and that’s the damned truth.”
In 1965, Morrison joined classical pianist Ray Manzarek, guitarist Robbie Krieger and drummer John Densmore to form a recording studio band, the Doors. With Morrison as vocalist and frontman, Elektra Records signed the Doors the following year, and in January 1967 the band released its self-titled debut album. The Doors’ first single, “Break on Through (To the Other Side),” achieved only modest success. It was their second single, “Light My Fire,” which catapulted the band to the forefront of the rock and roll world, reaching No. 1 on the Billboard pop charts. The Doors, and Morrison especially, became infamous later that year when they performed the song live on The Ed Sullivan Show. Because of its obvious drug reference, Morrison had agreed not to sing the lyric “girl we couldn’t get much higher” on the air, but when the cameras rolled he went ahead and sang it anyway, cementing his status as rock’s new rebel hero. “Light My Fire” remains The Doors’ most popular song, featured prominently on major lists of the greatest rock songs ever recorded. 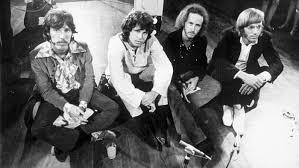