Recording Studios Sydney: In 1986, Mills passed away, and Jones’s son, Mark, replaced him as the singer’s manager. The next year Jones released the song “A Boy From Nowhere,” which put him back on the British charts and reached no. 2 pop. From 1988 to 1991, Jones worked on various collaborative projects. He performed with the group Art of Noise to create a bombastic remake of Prince’s hit song “Kiss,” which was a U.K. top 5 hit with a video that won the MTV Breakthrough Award. Jones also partnered with singer Van Morrison to release the 1991 album Carrying a Torch.

Jones subsequently released the albums The Lead and How to Swing It (1994) and Reload (1999); the latter was a collection of covers which went platinum six times in the United Kingdom and became a big seller internationally, offering up hits like “Mama Told Me Not to Come Home” and “Sex Bomb.” He also branched into TV and film, appearing as himself on The Simpsons, hosting award shows and acting in the films Mars Attacks! (1996) and Agnes Browne (1999).

Success continued through the 2000s, during which time he won many accolades, including the Brit Award for Best Male Artist. Other highlights included a performance for President Bill Clinton at the White House Millennium Celebration and for Britain’s monarchy for the Queen’s Golden Jubilee. Jones also received the Brit Award for Outstanding Contribution to Music.
He released Mr. Jones, in collaboration with Wyclef Jean, in 2003 and the following year dropped another album, Tom Jones & Jools Holland. In 2006, he had yet another U.K. top 10 hit, “Stoned in Love,” working with trance act Chicane. In 2008, Jones released his first album in 15 years in the United States, 24 Hours. His acclaimed album Praise & Blame was then released in 2010, anacoustic, spiritually driven effort. 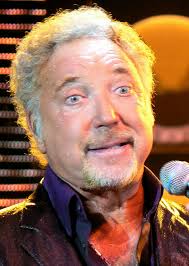