Voice Over Sydney: Frisian is one of a number of Germanic languages, a family which also includes
English, German, Dutch, Afrikaans, Norwegian, Danish, Faroese, Swedish, and Icelandic. Of these languages, the last five comprise what are known as the Scandinavian (or North Germanic) languages, while those remaining are classified as West Germanic. Dutch, Afrikaans, and German are closely related, just as the relationship between English and Frisian is, at least in historical
terms, a close one.

Voice Over Sydney: the Closest Language to English

Frisian, which is thus the living language most similar to English, is spoken in three main areas in The Netherlands and in Germany. Some ten thousand speakers of North Frisian live on the western coast of Schleswig-Holstein in Germany just beneath the Danish border. This region includes the environs of Naibel (Ger. Niebüll) and much of the rest of the area north of Bräist (Bredstedt), as well as the islands of Söl (Sylt), Feer (Föhr), Oomram (Amrum) and Deät Lun (Helgoland). (Note: throughout this book names of Frisian places are given in Frisian). The dialects spoken in these areas differ substantially from the other varieties of Frisian and also among themselves, to the extent that speakers from one region often cannot understand those from another. At this time virtually all varieties of North Frisian are severely threatened by German, although perhaps in part on account of this threat, there is increased appreciation of the cultural value which the survival of this language offers its speakers.

In a different region of Germany, located between the city of Oldenburg and the Dutch frontier, is the last remaining pocket of speakers of East Frisian. Real East Frisian should not to be confused with a type of Low German called Ostfriesisch. The real East Frisian was once extensively spoken throughout the countryside of what is known as Ostfriesland. Its use receded until the last
speakers of the East Frisian Island dialect of Wangerooge died at the beginning of this century, leaving the inhabitants of Saterland as the only representatives of this variety of the language. In the villages of Schäddel (Ger. Scharrel), Strukelje (Strücklingen), and Roomelse (Ramsloh), some one to two thousand souls use East Frisian (Seeltersk) for their daily communicative needs. 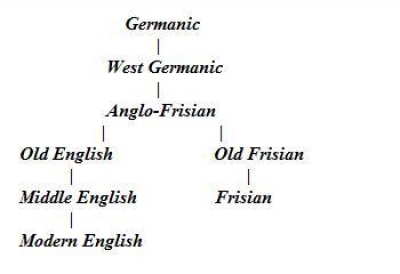