Voice Over Sydney: Indonesian (Bahasa Indonesia) is the official language of Indonesia. Indonesian is a standardized dialect of the Malay language that was officially defined with the declaration of Indonesian independence in 1945, and the two languages remain quite similar.
The language is spoken fluently as a second language by most Indonesians, who generally use a regional language (examples are Minangkabau and Javanese) at home and in their local community. Most formal education, as well as nearly all national media and other communication, are in Indonesian. In East Timor, Indonesian is recognized by the constitution as one of the two working languages (the other is English).
The Indonesian name for the language is Bahasa Indonesia (literally language of Indonesia); this name is sometimes used in English as well. The language is sometimes called “Bahasa” by English-speakers, though this simply means “language” in Indonesian.

Indonesian is a normative form of the Malay language, an Austronesian (or Malayo-Polynesian) language which had been used as a lingua franca in the Indonesian archipelago for centuries, and was elevated to the status of official language with the Indonesian declaration of independence in 1945, drawing inspiration from the Sumpah Pemuda (Youth’s Oath) event in 1928. It is very similar to the official Malaysian form of the language. However it does differ from the Malaysian form in some ways, with differences in pronunciation and also in vocabulary, due in large part to the many Dutch and Javanese words in the Indonesian vocabulary.

It is spoken as a mother tongue by only 7% of the population of Indonesia (mainly in the vicinity of Jakarta), but altogether more than 200 million people speak it, with varying degrees of proficiency. It is an essential means of communication in a region with more than 300 native languages, used for business and administrative purposes, at all levels of education and in all mass media.
However, most native Indonesian speakers would admit that the standard correct version of the language is hardly ever used in a normal daily conversation. One can read standard correct Indonesian in books and newspaper, or listen to it when watching the news on television, but few native Indonesian speakers use formally correct language in their daily conversations. While this is a phenomenon common to most languages in the world (for example, spoken English does not always correspond to written standards), the degree of “correctness” of spoken Indonesian (in terms of grammar and vocabulary) by comparison to its written form is noticeably low. This is mostly due to the fact that most Indonesians tend to mix aspects of their own local dialects ( Javanese, Sundanese, Balinese, and even Chinese) with Indonesian when speaking, which results in the creation of various types of accented Indonesian, the very types that a foreigner is most likely to hear upon arriving in any Indonesian city or town. This phenomenon is exacerbated by the use of slang, particularly in the cities. A classic example of a speaker of accented Indonesian is former president Soeharto, whose Javanese dialect came through whenever he delivered a speech. 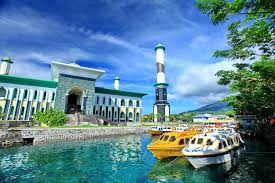