Mastering and the Recording studio

Clients in our Recording studio, Crash Symphony Productions, often ask us what the mastering process is, and if it is required. This is a perfectly reasonable question, and to be honest, it takes a little while to really understand what mastering is and how it can benefit your record. 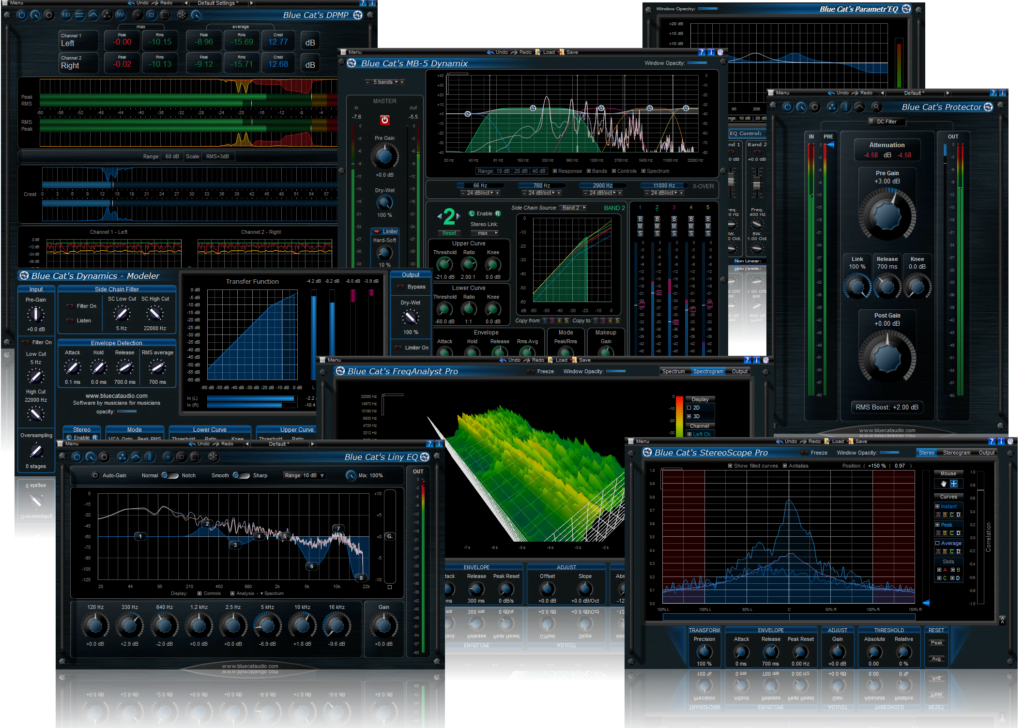 These are some of the plugin that are used in the mastering process. We often master recordings in our Recording studio.

There are many aspects to mastering that clients are often unaware of; hopefully this description will help shed some light on this confusing stage of the production process. Mastering involves working with either a stereo or surround mix-down. If more detail is required, then stems of the track are provided to the mastering engineer. Stems are sub-files or important groups of elements within the project mix.
For example, the drums are traditionally made up of many different microphone signals, such as the kick, snare, toms, overheads, etc. All these elements can be summed down to a single stereo file of the entire mixed drum track. The same may be true for the lead vocal, or all the guitars, and all the backing vocals, and so on. Often the lead vocal and bass are left as their own single-track stem. So rather than dealing with many tracks (like a mix engineer would during the mixing process) the stems are blocks of tracks that have been summed down to a single track in the Recording studio. Essentially, the project is simplified. Mastering engineers will sometimes request to work with stems if more surgical accuracy is required. Stems give the mastering engineer more flexibility in what they can do to enhance the overall mix of the project that has come from the Recording studio.
The first step that the mastering engineer will take is to attempt an enhancement of the mix. This concept in itself is provocative in nature and is why good mastering engineer can get paid a lot for their work. The mastering engineer is essentially attempting to ‘better’ the audio/mixing engineer’s mix.
There are many things that can be done to attempt this enhancement process. They can widen the stereo spectrum of the track, compress the track in multiple layers, run the project through tape processing to add dimension and warmth to the sound, equalise the mix to further balance the track, and even correct anomalies in the mix like clicks or crackles. The above examples are just a few things that can be done during this stage of production. But the most important (and probably most controversial) thing that the mastering engineer will do is to make the project louder.
In the music industry, there has been a general trend towards increased volume of masters since the latter half of the twentieth century. This is because volume can be used as a psychoacoustic effect, fooling the brain into thinking that louder tracks sound better. However, the more that a song is pushed to a maximum volume, the more it requires “limiting”. This is the process where the peaks of a track are flattened out against a ‘brick wall’ compressor. As the volume of the track is pushed into the ‘brick wall’ the sound of the track begins to change as the dynamic is removed. Put more simply, the variation in volume between the loud and the soft sections of the track become smaller. This drastically affects the mix of the song. Whilst initially this has an impressive impact on the listener, it actually reduces the longevity of the piece and listeners find it difficult to listen to the song in the long term. It is fatiguing to their hearing!
Various artists have been competing for volume in order to capture the attention of listeners over their rivals in the ‘fast-food pop music’ world that we are currently living in. This has been coined the ‘loudness wars’. Unfortunately, it has continued to the point of ridiculousness and the overall listening experience has been drastically jeopardised. Bear in mind that not all mastering engineers will push the volume up to the maximum level, but this is something to really look out for if it is not what you are seeking for final product.
Once the enhancement stage of the mastering process is complete, the track balancing stage begins. This is where the mastering engineer alters the sound of individual tracks. Track balancing makes them all sonically coherent on the one listening medium, whether it is vinyl, CD or mp3’s. This stage involves compromise. Each track will need to be altered from their optimum mastering settings in order to fit together their surrounding tracks. For example, if one song is extremely soft and the song that follows is extremely loud, the balance will need to be adjusted so that both tracks are at the same perceived volume.
More surgically speaking, if one song is mixed to be really bright and is then followed by a very dull-sounding track, a compromise will need to be reached so that they don’t sound completely out of place in when played sequentially. This process will apply across all the tracks on the CD. A degree of sonic-uniformity will need to be agreed upon by the mastering engineer and client.
Now that the enhancement and track-balancing stages of mastering are complete it is time for the integration of track codes. This is where identification codes (called ISRC codes) are digitally embedded into the tracks, so that they can be identified online and by audio regulation groups worldwide. Each individual artist will have their own unique set of ISRC codes that will allow things like online apps in iTunes to track the CD as well as individual tracks. This will include tracks names, artwork, song and album length, artist details, etc.
Once these codes are properly embedded, it is the responsibility of the mastering engineer to print master copies of the recordings on the selected mediums, ready for duplication. The client will sign off on the duplication masters and they will then be sent off to the duplication/production house for mass production.