The many types of Recording studio drums is staggering. Candombe (can-dome-bey) is an African derived rhythm that has been an important part of Uruguayan culture and more recently in the recording studio for over two hundred years. Uruguay, with a population of approximately 3.2 million, is a small country located in South America, bordered by its two massive neighbours, Brazil (162 million) to the East, and Argentina (34 million) to the West. This rhythm traveled to Uruguay from Africa with black slaves, and is still going strong in the streets, halls and carnivals of this small enchanting country.

Recording Studio: What is candombe?

To understand how this recording studio rhythm, which is so strongly rooted in Uruguayan culture evolved, one would need to turn back the pages of African and South American history to look at how this contagious rhythm anchored at the shores of Montevideo.
Montevideo, the capital of Uruguay, was founded by the Spanish in a process that was begun in 1724 and completed in 1730. African slaves were first introduced to the city in 1750. The roots of this population were not homogeneous, but rather a multi-ethnic swath of Africa that was culturally quite varied. 71% were sourced from the Bantu area, from Eastern and Equatorial Africa, while the rest came from non-Bantu Western Africa: Guinea, Senegal, Gambia, Sierra Leone, and the Gold Coast (what is today Ghana).
The candombe rhythm is created by the use of three drums (tambores), tambor piano, tambor chico and tambor repique. When these three drums heat up, it’s like nothing you’ve ever heard before.
The piano is the largest in size, and lowest in pitch of the three drums, holding the rhythmic base of candombe. Its rhythmic function is similar to the upright or electric bass. Its drumhead measures approximately sixteen inches in diameter.
The chico (small) name given because of its size and thinner drumhead, the highest in pitch of the three drums, and the rhythmic pendulum of the cuerda. Its drumhead measures approximately eight-and-one-half inches in diameter.
The repique’s (ricochet) name tells us this drum embellishes candombe’s rhythm with improvised phrases. Its drumhead measures approximately twelve inches in diameter. 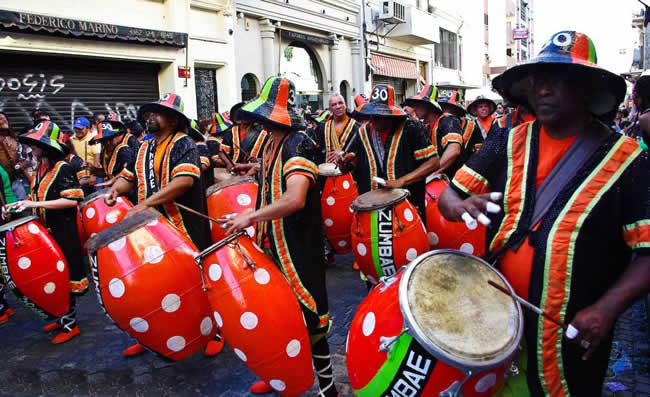