Recording Studio: Country music was one of the first genres of modern American popular music, and old-time music was its earliest style. It developed in the southeastern states of the USA as a mix of folk music from the British Isles, church music and African American blues. It was played on instruments like acoustic guitar, mandolin, autoharp, fiddle and the banjo. Old-time music was first recorded in the 1920s, with recordings of the Carter Family becoming the most popular. A. P. Carter collected folk songs and also wrote new songs, and he sang them in harmony with his guitar-playing sister-in-law Maybelle and his wife Sarah, who also played autoharp. Songs like Can The Circle Be Unbroken (By and By) and Wildwood Flower became hit records, and the Carter Family became the first stars of country music.
Jimmie Rodgers, another of recording studio country music’s earliest stars, was recorded at the same recording studio as the Carters. Jimmie was taught how to play guitar and sing blues and work chants by African Americans in railroad gangs in which he worked. He also heard old-time music and folk songs and combined all these styles in his own songs. He often used a vocal technique called yodelling, and his first hit record, Blue Yodel, sold nearly half a million copies in 1927.

Before television, American families often sat together and listened to the radio. One of the most popular programs was a live country-music variety show called the “Grand Ole Opry”. It was broadcast from Nashville, Tennessee, which had become the centre of the country-music business. Listeners heard old-time music as well as another style called Western music. This style often had horse-like clip-clop rhythms and songs about lovesick cowboys and gun-fighting outlaws. Western music became popular in the 1930s and 40s when singing cowboys began appearing in Hollywood cowboy movies called “Westerns”. Singing cowboys like Gene Autry and Roy Rogers became huge country-music stars, and Nashville executives decided the cowboy image was better for country music than the hillbilly image of old-time music. They renamed the genre “Country and Western music” and began dressing their musicians in cowboy clothes. 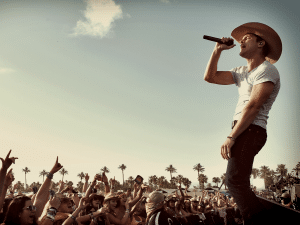