Recording Studio: The history of Jamaican music is inextricably intertwined with the history of the Jamaican people. Jamaica is the third largest island in the Caribbean, and was initially populated by the Arawak people. Christopher Columbus “discovered” the island on his second voyage to the Americas, and it was settled first by Spanish colonists, and later by English colonists. It became a major hub for the Trans-Atlantic slave trade and sugarcane production, and because of the high population of Africans and people of African descent on the island of Jamaica, it was the site of multiple slave uprisings, many of which were successful, resulting in the establishment of long-term Maroon (escaped slave) colonies, some of which lasted until the British Empire’s abolition of slavery in 1832.
The large numbers of Africans also helped to keep a high level of African cultural elements, including musical styles, alive in Jamaica throughout the colonial era.

These African musical elements formed the basis of Jamaican music as we know it. The one-drop rhythm, which is the defining rhythmic element of reggae music, is distinctly African. The call-and-response style of singing which is so common in West African music is reflected in many genres of Jamaican music, and even forms the basis for toasting which, in turn, forms the basis for rap music. Even the language of African-descended Jamaicans is reflected in Jamaican music, much of which is sung in patois, a Creole language with both African and English linguistic elements.

English and other European influences are also apparent in Jamaican music.
During the colonial era, black slave musicians were expected to play the popular music of Europe for their European masters. Thus, slave bands would perform waltzes, quadrilles and other figure dances, reels, and many other dances and song styles. These song styles remained present and intact in black Jamaican folk music right up until the middle of the 20th century.

The first folklorist to collect and categorize Jamaican folk songs was a man named Walter Jekyll, whose 1904 book Jamaican Song and Story is in the public domain and available to read for free or download as a PDF from Google Books.
Though the book is a bit dated, it’s a wealth of information, and the earliest scientifically-collected grouping of Jamaican songs and stories, as well as the elements that made up Jamaican music at that time. 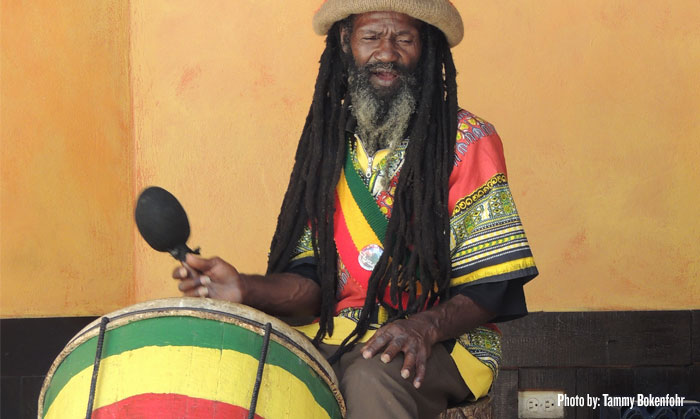