A Recording Studio membranophone is any musical instrument which produces sound primarily by way of a vibrating stretched membrane. It is one of the four main divisions of instruments in the original Hornbostel-Sachs scheme of musical instrument classification, the other three being idiophone, chordophone and aerophone (a fifth class, electrophone, was added in a later revision).
Most Recording Studio membranophones are drums. Hornbostel-Sachs divides drums into three main types: struck drums, where the skin is hit with a stick, the hand, or something else; string drums, where a knotted string attached to the skin is pulled, passing its vibrations onto the skin; and friction drums, where some sort of rubbing motion causes the skin to vibrate (a common type has a stick passing through a hole in the skin which is pulled back and forth).
In addition to drums, there is another kind of recording studio membranophone, called the singing membranophone, of which the best known type is the kazoo. These instruments modify a sound produced by something else, commonly the human voice, by having a skin vibrate in sympathy with it.
Examples of membranophones include all types of drums including the petia, sogo, bongo, the bedhug and the kazoo. In a membranophone, sound is produced by a vibrating skin stretched over an opening.

The Hornbostel-Sachs scheme of musical instrument classification divides membranophones in a numeric taxonomy based on how the sound is produced:
1) by hitting the drumskin with a hand or object (most common form, including the timpani and snare drum)
2) by pulling a knotted string attached to the drumskin (common in Indian drums, and can be considered an example of a chordophone as well)
3) by rubbing the drumskin with a hand or object (common in Irish traditional music, an example is the bodhran)
4) by modifying sounds through a vibrating membrane (unusual form, including the kazoo) 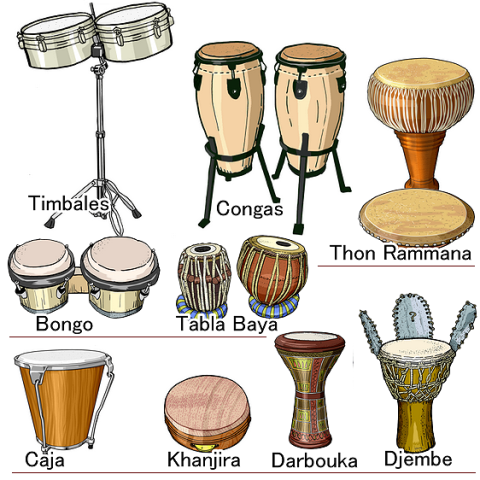