Recording Studios Sydney:  Eventually, Bowie went out on his own. But after recording an unsuccessful solo album, Bowie exited the music world for a temporary period. Like so much of his later life, these few years proved to be incredibly experimental for the young artist. For several weeks in 1967 he lived at a Buddhist monastery in Scotland. Bowie later started his own mime troupe called Feathers.
Around this time he also met the American-born Angela Barnett. The two married on March 20, 1970, and had one son together, whom they nicknamed “Zowie,” in 1971, before divorcing in 1980. He is now known by his birth name, Duncan Jones.

By early 1969, Bowie had returned full time to music. He signed a deal with Mercury Records and that summer released the single “Space Oddity.” Bowie later said the song came to him after seeing Stanley Kubrick’s 2001: A Space Odyssey: “I went stoned out of my mind to see the movie and it really freaked me out, especially the trip passage.”
The song quickly resonated with the public, sparked in large part by the BBC’s use of the single during its coverage of the Apollo 11 moon landing. The song enjoyed later success after being released in the United States in 1972, climbing to number 15 on the charts.
Bowie’s next album, The Man Who Sold the World (1970), further catapulted him to stardom. The record offered up a heavier rock sound than anything Bowie had done before and included the song “All the Madmen,” about his institutionalized brother, Terry. His next work, 1971’s Hunky Dory, featured two hits: the title track that was a tribute to Andy Warhol, the Velvet Underground and Bob Dylan; and “Changes,” which came to embody Bowie himself.

As Bowie’s celebrity profile increased, so did his desire to keep fans and critics guessing. He claimed he was gay and then introduced the pop world to Ziggy Stardust, Bowie’s imagining of a doomed rock star, and his backing group, The Spiders from Mars. 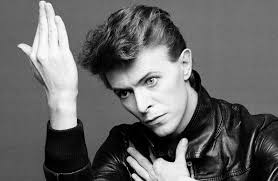