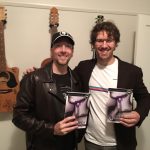 This week Crash Symphony Sydney Recording Studios welcomed US Voice Coach Richard Fink IV. Richard is a pioneer in the field of vocal/singing coaching. He is closely associated with Crash Symphony Sydney Recording Studios and has calibrated on a number of recording projects. We integrate Richard into projects when our artists are requiring the next level in vocal coaching through a recording project. Whilst Richard is based in New York, USA, we have kitted out our studio so that our clients can see and hear him via a video-Skype linkup. This allows Richard to communicate directly with our producers in the control room and the artist in the sound booth. So it’s like he is actually in our Sydney Recording Studios! We have been stunned by the results that he has achieved for our clients. Richard’s specialty is coaching over the internet using Skype and FaceTime. This has allowed him to spread his unique methods of vocal coaching all over the world.
When he was in our Sydney Recording Studios he spoke to us about how he has been developing his new methods of voice coaching and promoting his new book throughout Australia. He also has an iPhone app that is designed to help singers organise their methods and training. We encourage all our clients who are serious about getting the best results from their singing in our Sydney Recording Studios to contact Richard Fink IV at Throga.com and organise some online lessons. His new book, Throga: 7 Dimensions of Singing, is currently available on his website and the app is free!
Whilst he is in Sydney he is giving a seminar on his singing methods at the JMC academy on Thursday, September 29th, 2016. For more information about Richard Fink’s 7 Dimensions of Singing please feel welcome to contact our Sydney Recording Studios.