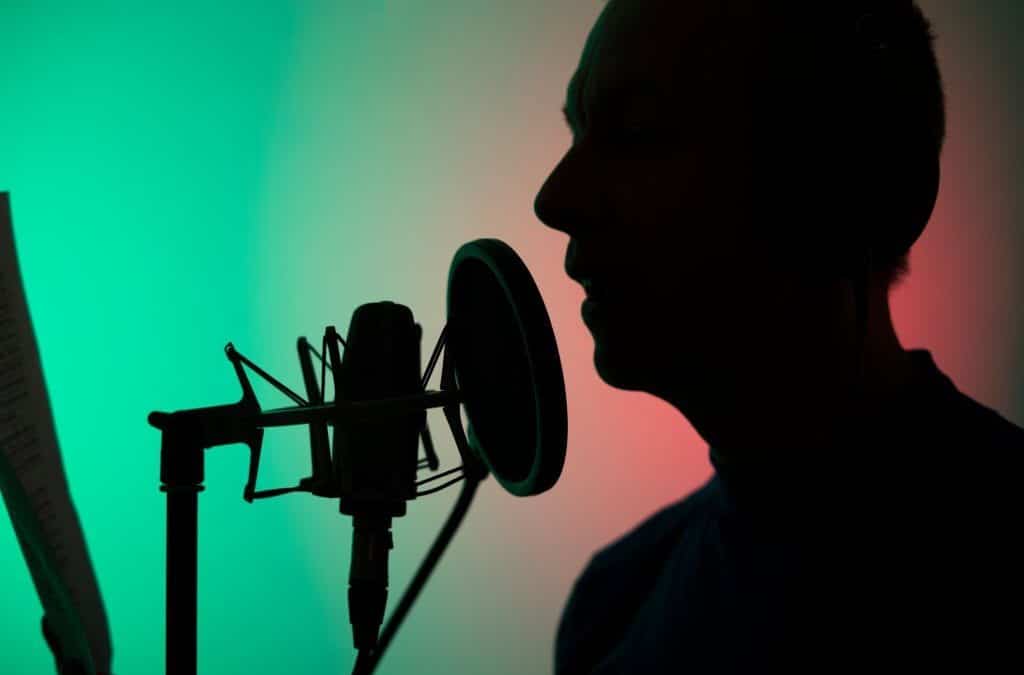 Voice Over Showreels are the single most important tool in landing a job in the voice-over market. And it’s a very lucrative market if you can do well. There’s a lot to being good at voice over but the process of getting a good voice over reel produced can be a little mysterious to even the most professional voice over artists. In this article, we’re going to explain our process for getting you the best voice over reel and landing you big jobs. We will look at the script choice, the recording process, post-production, and presentation to the client. Read on to learn more about recording a voice-over showreel with our recording studio, Crash Symphony Productions.

Voice over showreels doesn’t need to be too long. The reality is that the client will have decided on whether your voice is right for the job within the first 20-30 seconds. Probably shorter. Therefore, it’s a really good idea to give an intro to your voice over showreel that is natural, without backing music, and says who you are immediately. An introduction that really stands out is “If you’re looking for smooth sexy voice, or maybe a cheery party person, or someone who means business…. My name is #### %%%%% and this is my showreel!”

This example is good because it is immediately into the sale of your voice without wasting any time and immediately showcases some different styles before even getting into the different ads on your showreel. Straight to the point.

Voice over showreels should be concise but cover the ground that you want in a short space of time. Remember, they’re not interested in the ad that you’re reading. They’re interested in your voice tone, delivery, and range of skills. It’s good to choose some ads that are commercial, some that are corporate, some that are serious, and some that are funny. In most instances, we included about 5-6 different ads. Some people want to go all out and do everything in one showreel. However, sometimes it’s best to have separate files, showreels, for different jobs. For example, if you know the client wants a corporate job to be read, make sure you have a showreel ready to go that’s geared towards the job that you’ll be aiming to land. Essentially, what we’re saying is script choice is the first big task in getting a good showreel done.

Voice over showreels gets their quality from the performance that happens in the studio. It takes teamwork between us, the recording studio, and you, the voice over talent. Our audio engineers have recorded thousands of voiceover sessions. After listening to so many voices over recordings we have gotten good at hearing what is required for a certain ad. We will coach you through the process and draw out of you the best performance and approach to the script being delivered. In saying this, being prepared when you come into the studio is super important. Professional voice-over artists are prepared before they come into the studio.

Recording the voice-over showreel is the second most important phase in the process. Once the voice has been recorded, we then need to edit the voice for the best takes and treat the voice. Editing the takes will means finding the best bits that make up a whole script read which is exactly how you would want a potential client to hear your delivery of the script. Some reads will require that remove the breaths and others will require us to leave them in. We will adjust times between words and sentences to make sure it all flows very well. Once we have the cut that we want we will then treat the voice. This means adding compression, de-essing, equalisation, and other processes that make the voice sound like a finished, chic, expensive, and super professional voice.

Once we have the voice sounding as it should we then need to add music into certain sections. Most voice over showreels will have some music added into certain areas. This is to make the showreel sound just like a real TVC or corporate ad. Finally, when the music and ads are sounding complete, we then focus on the order in which each ad should occur. The showreel will always start with the introduction and then flow into the most captivating selection of all the ads recorded and quickly crossfade into the next. Staying on any ad too long will make the listener lose interest. They want to find their voice fast, so you have only a short time to sell your style and tone.