The Audio book industry is growing at a rapid rate. The Audio Publishers Association (APA) today reports that twice as many audiobooks were published in 2013 than in 2012, “marking two years in a row that the industry has doubled the number of titles published.”
Estimated audiobook retail sales in 2013 totalled $1.3 billion. Based on the data from reporting publishers, the report finds 35,713 titles were published in audiobook format in 2013 – more than double the number from the previous year’s 16,309.
The growth is explosive, considering that only 6,200 titles were released in 2010.
Not all audio books are created equal though. At our voiceover sydney studio crash symphony productions we have the expertise required to ensure that your audio book is of the highest standard.
Here are what I consider to be the most important factors in voice over sydney audio book creation.

This is probably the most important thing for voiceover Sydney audiobook creation.  There is nothing worse than listening to a monotone narrator with no life.  This is especially important with non-fiction titles.  At least with fiction, there are characters and the narrator has something to work with.  With non-fiction or self-help type titles, the narrator has to be more creative in order to engage and hold the attention of the listener.  At our voice ver sydney studio crash symphony productions we can help you find the best possible narrator for your Ebook to ensure that it is interesting and engages the reader.

How the voice over sydney narration is recorded is also of great importance.  With the best equipment and microphone techniques the warmth and character of the voice can be captured at it’s best.  This contributes greatly to the overall feel of the audiobook and helps to engage the listener.

The narrator will typical do a few takes of the same passage.  Good editing is crucial to choose the best take and make sure that the dialogue flows seemlessly to allow easy listening. 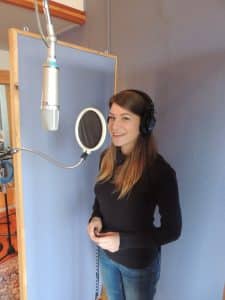